Screenshot of the Month contests for 2015

I remember that was totally non intended, and laughed at it later during photo editing.

Here are the top three screenshots of 2015: 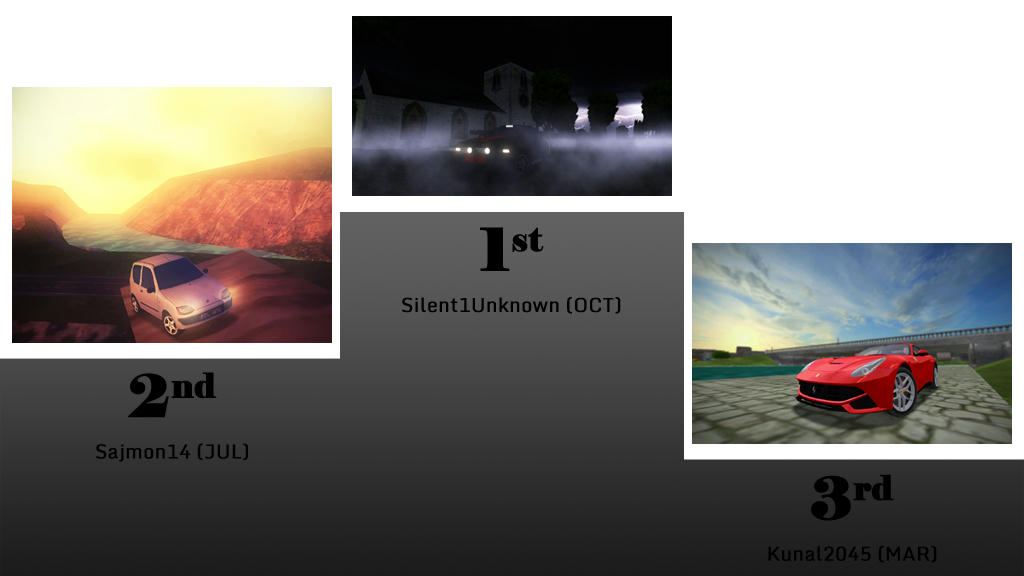 Winners can display these new banners in their signatures if they like:

Here is what the tally looked like for the SOTY contest:

I was surprised so few people voted.

And here is the addition of all the tallies throughout the year (SOTM votes only):

Some interesting things we learn from it:
- Hungarymate, BUGATTIMAN and Matyii got more total votes over the year than others, but none of their screenshots made the top 3. This may mean that they had consistently good screenshots or that their supporters didnt vote for them during the SOTY contest.
- BUGATTIMAN had the highest single-vote-count (10 votes in September)
- There's not much else to derive, since the participation has been a lot less than last year (128 vs 187 overall votes). Perhaps its th natural decay of MM2 interest or maybe due to a lack of motivation (such as prizes)

Thank you all and good night!

and also congrats to everybody who participated during one more year and contributed for this great contest.

As long as people continue intrested in voting the contest will live... Or were you talking about you? :/

Congrats to everyone, and thanks for your votes

Congratulations to the podium.

- This may mean that they had consistently good screenshots or that their supporters didnt vote for them during the SOTY contest.

They simply had reserved votes for the best ones. So, the less priority votes got funneled to hungarymate, BUGATTIMAN253MPH and matyii cuz of lack of participants. Frankly, this year was splendid and the best ones ever, kept coming. Not to mention the Halloween one - The Best. And I'm staggered ...

For 2014, I had introduced prizes (early preview or beta tests of my potential MM2 car releases), but I couldn't sustain it and I'm still owing some people.

I would like to start the contest again for 2016, but I wont be available until March. Can someone else take care of it while I'm gone?

Or can we try something else...a year long contest...10 months to model a car, 2 months to post a screenshot featuring that car and finally voting for best modeler and screenshot at the end of the year....dunno how many people would go for that...

Apparently seems to be something wrong with the PMs, since I'm unable to send anything without receiving an error message, so I'll write it here.

Although I'm surely not the best screenshoter arround, if nobody else moves forward I don't mind to host it until you're avaliable to take the place again.

BIGzee already contacted me about starting the contests for 2016 while I'm gone. Talk to him if you want to help out. I think he'll start it in February with a 2-in-1 SOTM contest (for having missed January).

See you guys in March!