I didn't experienced any problems with the vehicle in-game KingAndy. By the way, it looks awesome!

Also, can't wait for your other project too.

[quote="BUGATTIMAN253MPH";p="111044"]Hmm...
I don't seem to be getting any fps hits while driving the Arkhammobile Andy. It's really weird that you're getting lag after changing the reflection levels. Are you using Hardware with T&L? It's probably nowhere near the cause, but I'm stumped, lol.[/quote]

Would I look too stupid if I said that was EXACTLY the issue?! LOL! Thank you man, I've been scratching my head all this time for a non-issue. Still, the idea to reduce the poly count of unnecessary details was good, but I will use the decimate tool not to get such a decrease in details, now that I know it's not creating any problems.

Woah, that's impressive. But to be honest, with all of the work of setting up dgvoodoo to run MM2 on a modern Windows OS, I'm not surprised. It must be so easy to overlook MM2's graphics options when you've got a PC fit to run a Forza game.
But all in all you've made some good progress. Some speedy brake NOS arcade cars are always welcome

No particular problems also from me with this conversion. The result is really good so far.

The rear flames effect could be made better, and then, you should add the ground projection also for it and have the rear lights one always visible.
Fiat 500 = Italian motorization. Franch88, MM2 eXtreme forum and website Administrator.
|Franch88's MM2 Releases|
Top

[quote="Franch88";p="111057"]No particular problems also from me with this conversion. The result is really good so far.

The rear flames effect could be made better, and then, you should add the ground projection also for it and have the rear lights one always visible.[/quote]

Ah, I guess from my "test" ended up showing off way too much! Â :lol: Â

Regarding the ground flares (and the glowing disk brakes), the idea is that the optional included file which disables the NOS effect would also enable these, which are otherwise not visible (basically, by default you'd have NOS and flames but no ground flare nor glowing disk brakes, but by using the NOS deactivator file you'd get no NOS nor flames, but in return the aforementioned extra details).

Now, both the ground flare effect and the animated flames are a huge PITA. The first behaves very oddly, as the car bumps or jumps it always stays at the same height, therefore they'd float and go through the ground if they were assigned as a TLIGHT object rather than BLIGHT (this is also the reason why I opted for disabling them when using the NOS effect, as the player most likely would be driving around while "braking" and making the issue quite obvious). The only solution would be having them as part of the shadow, but then they wouldn't glow more intensely when braking... It's either a matter of considering the presence lights would realistically shine bright enough to be always visible or not (and in this car it wouldn't really seem to be the case, but IDK which would be the best option - besides cutting it, that is).

Regarding the flames, they'd be properly credited in the due time - the animation was made by Sajmon14 for his Subaru, who kindly allowed me to use it. The only thing I've done to the textures was to edit the color in order to be yellow rather than blue. Moral of the story? If it works quite well why fixing it, the only reason I even included that was because he offered to help, because following the mindset not to waste time with pointless features I wouldn't really bother making a better one.

I'm delighted to announce the Arkham Knight Batmobile is just awaiting approval! Even though some of you may have already tried the beta, I've kept a few surprises under the sleeve until now, and as traditional, I'm going to share several of the final product details down bellow:

The Arkham Knight Batmobile was quite a challenge - this is exactly the sort of conversions that can be relatively simple or fairly complicated depending of your approach, and I tried my best to recreate as much perks and details of this vehicle that can be considered quite a staple of the game it comes from (besides, for us PC gamers, the notoriously bad optimization - oh well, now's your chance to finally drive the Batmobile in smooth 60FPS!) Besides the pretty entertaining NOS effect with animated flames (special thanks once again to Sajmon14 for hooking me up with these), I also tried my best to get the tuning specs right - yet with a more arcade-ish twist - and managed to render an image of the interior to make a fairly decent dashboard, in 16:9 ratio as typical (hey, this mod even offers 1st person view unlike AK, so in a way this mod is even better than the original!... right?).

And now, the grand surprise: there's a second livery of the Jokermobile (yet another thing you can't play with on AK, KingAndy 2 - Warner Bros. 0!) - indeed, this is not another vehicle but really a second livery, being the extra 3D details invisible on the "regular" one. I had to dig around the web for quite a while in order to find these textures, but I did 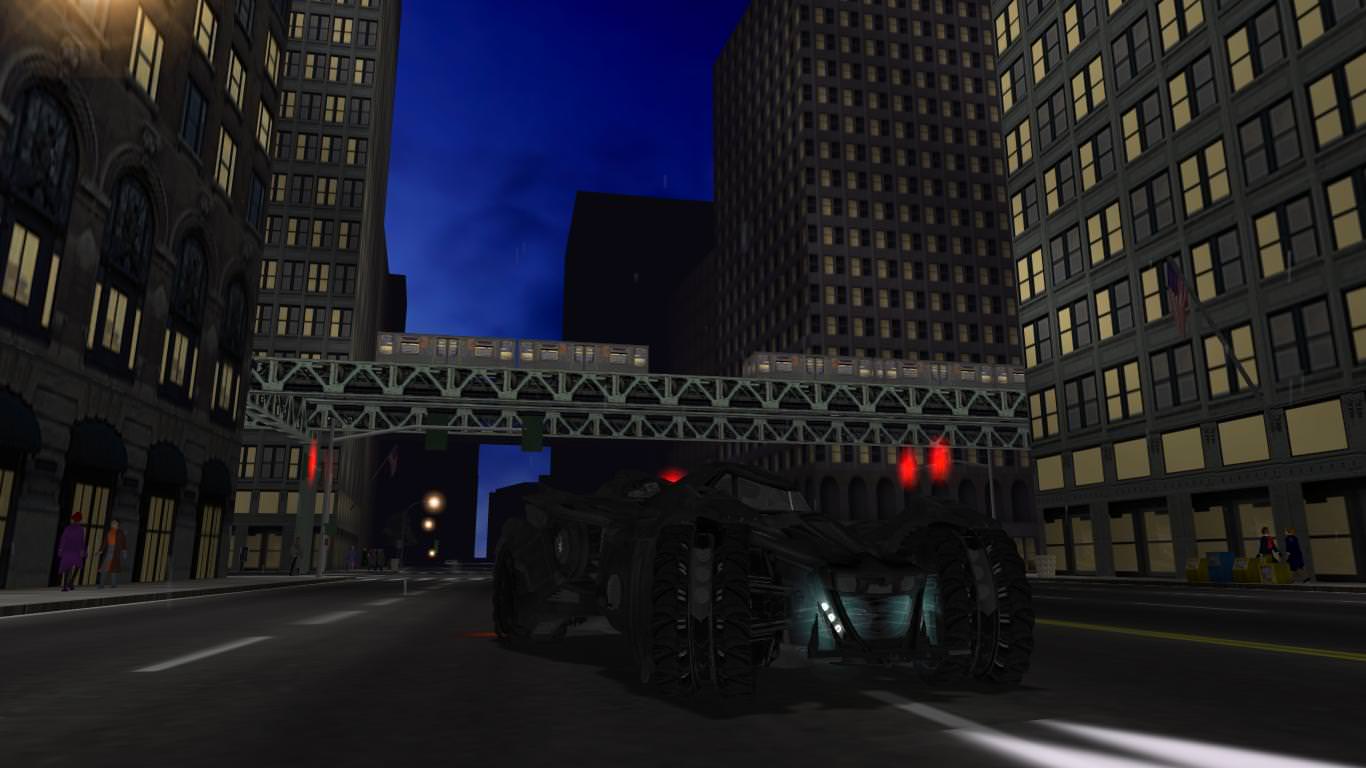 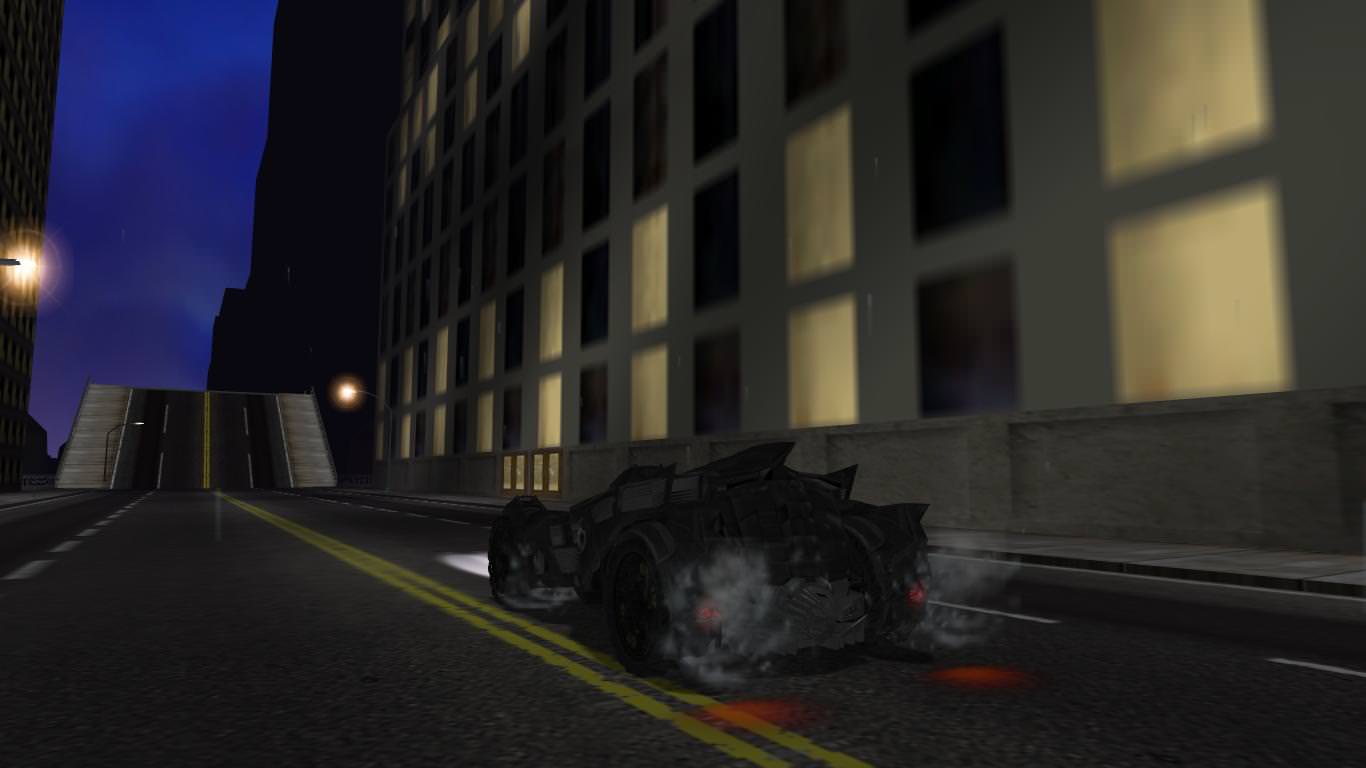 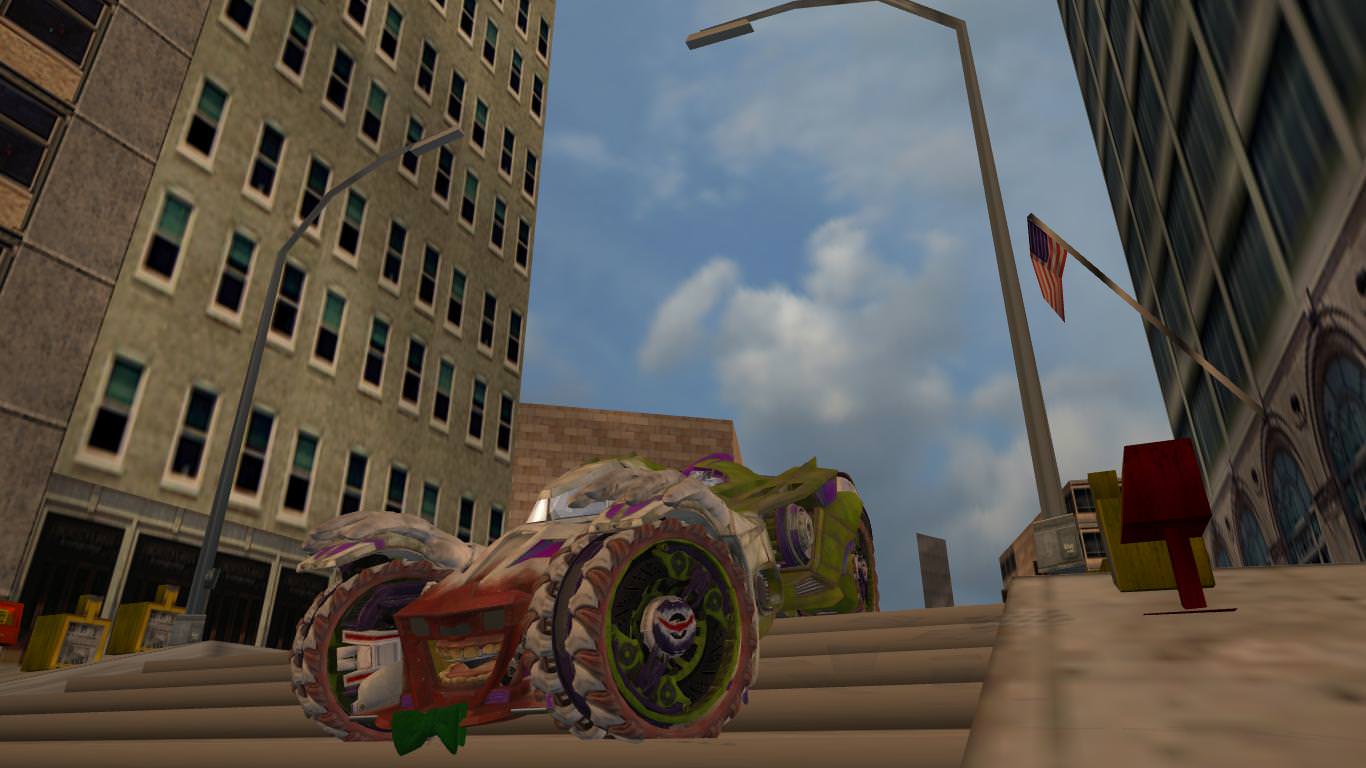 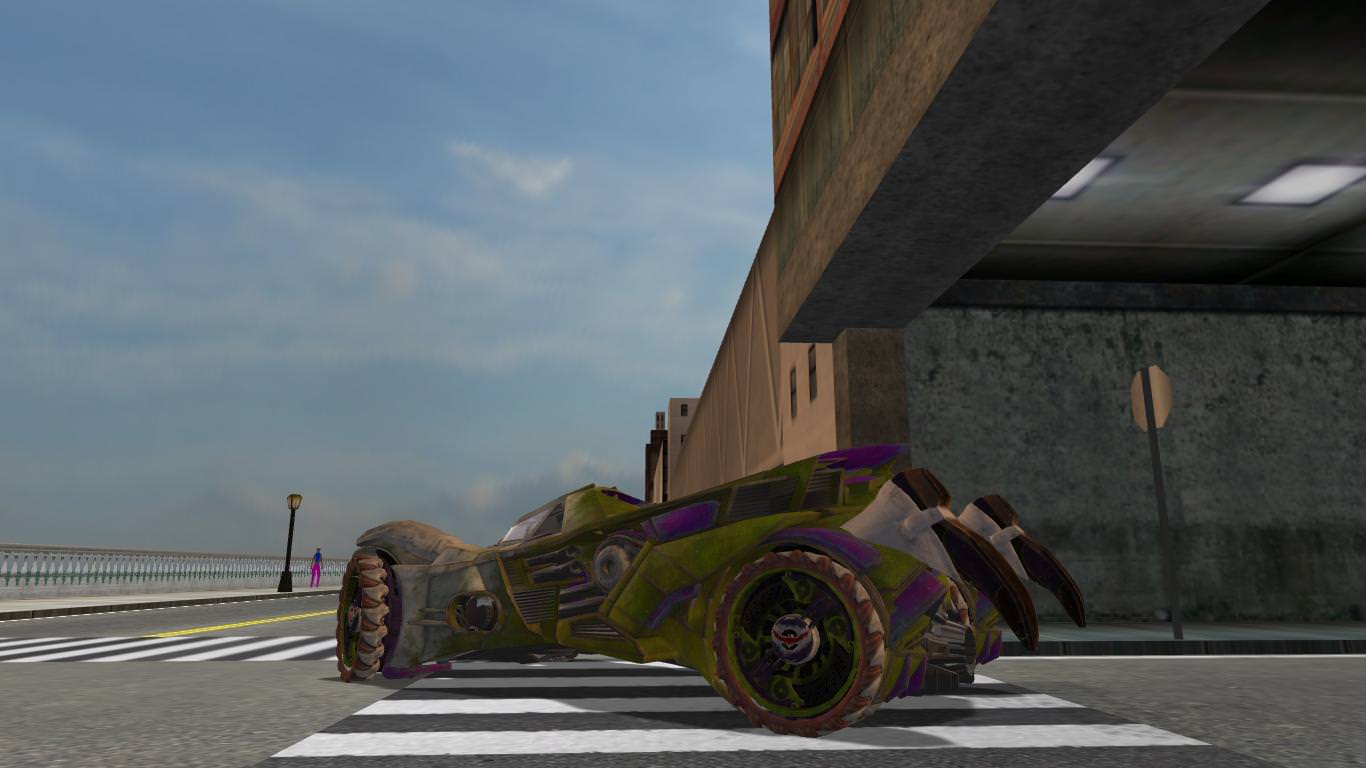 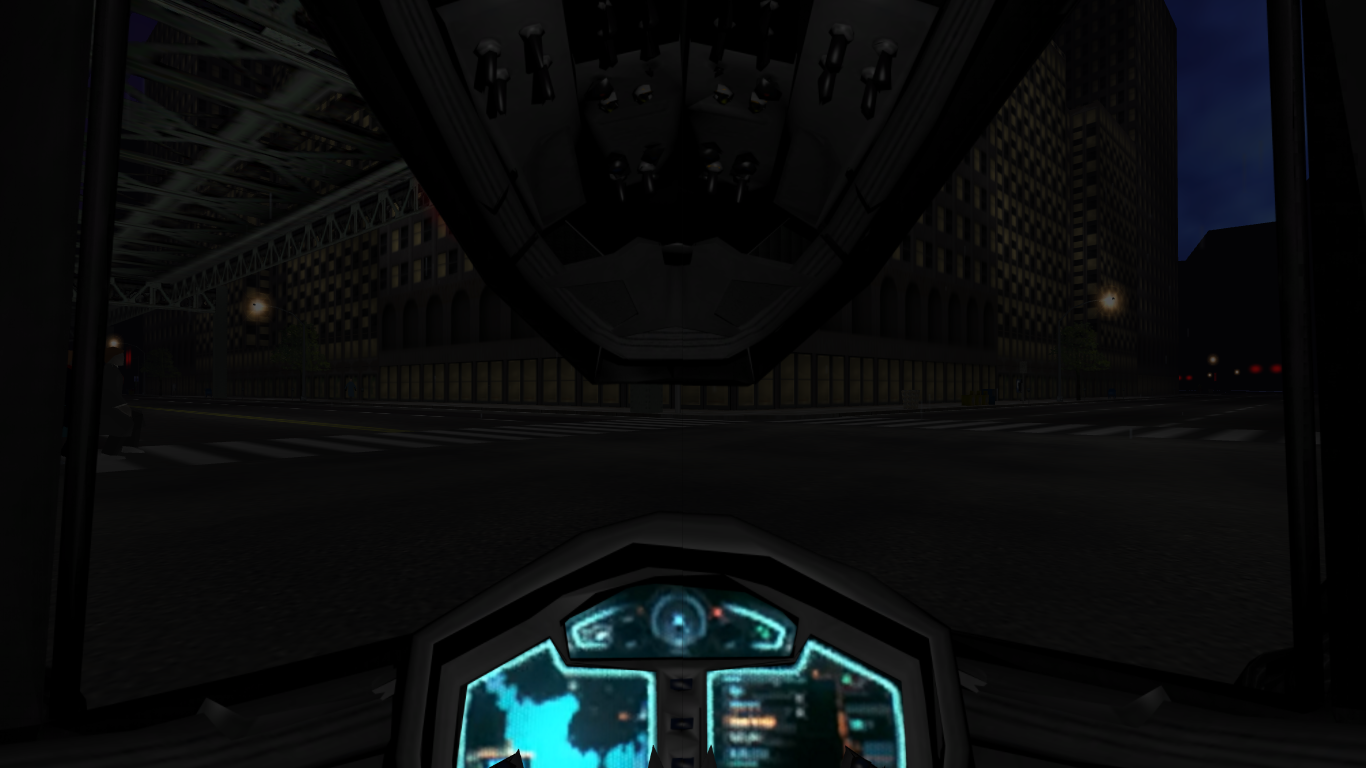 It should be available from MM2X and my website very soon, and very soon is also a sneak peek of my next finished car. Â 8)

The Joker themed paintjob looks very curious, and you've done an awesome work with this conversion!

On the meantime, everyone can take a peak at the final release in this "promo" video:

Awesome work here KingAndy! Both with the conversion and the video

Can't wait for its release here at MM2X! By the way, those pedestrian voices in the video.

I see you enjoy my little mod i made some time ago.

I see that you have the Ozzmosis album cover as your avatar. Into the Ozz are you?  :)

This should be a terrific conversion. Nice video too, good choice of music, very Batman-like.

Users browsing this forum: No registered users and 17 guests